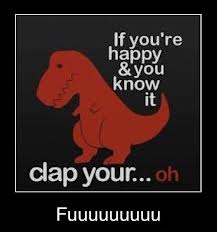 This is how I feel this morning. My arms are swollen from the top of the bicep to mid-forearm, and holding them in any position other than a weird kind of bent right-angle hurts. A lot. Straightening them out is pretty much a weird kind of hell, that results in my fingers going tingly. It started yesterday, the day after I did the most full-on pull-up training session I’ve done. I’ve set a goal with my trainer for 2015 that I want to be able to do one unassisted pull-up by the time the year is out, so the pull-up activity has been upped recently.

I most often do pull-ups on a machine, the kind that counterbalances your weight so you’re only pulling up with the weight you’re capable of. I also use the bands, but only when I’m working with my PT- even with the thickest band I still need help. Traditionally I’ll use the thickest band, and do 3-4 sets of 10 pull-ups. The first 5 are easy, the next 2-3 get harder, and I need assistance with the final 2. I’ve also done jumping pull-ups: jumping to the ‘up’ position, then focussing on a controlled ‘negative’: the decent.

On Monday we tried a whole new ballgame though- a very thin elastic that, while providing some resistance, seemed to go further in stabilising my movement that relieving weight from my arms. My trainer was lifting me when I needed the help (the whole time), then I was doing a controlled decent. Because this was pretty foreign to my body, we did 10 sets of 5 reps with a good minutes rest in between (minimum). I played with different techniques during the session and walked away feeling pretty positive- until I woke up Tuesday morning. The T-Rex arms had hit.

Since then, even the most basic tasks have brought tears to my eyes. Brushing my hair, opening a door, typing, holding a coffee, eating soup, holding a phone to my ears… they’ve all become very complicated tasks, given my very swollen and sore arms.

I consulted Dr Google (I know, I shouldn’t), pretty much to get an idea of whether I’m being a big baby or whether I should be thinking about heading to see a doc. My body’s experienced a lot of new and foreign things since I started training with a PT, and many of those things have been painful- but never in a way that made me think something was wrong. Only in a way that made me realise I’d worked my body hard, and it was repairing.

So Dr Google (and the gazillion Cross Fitters online) reckon that my symptoms add up to some kind of mild form of Rhabdomyolysis. The general consensus seems to be that it’s pretty normal when starting out on pull-ups or doing a lot of negatives. It can be super serious in that it can effect your kidney functioning, so I guess for now I just keep an eye out for other symptoms. Given that it’s day 3 post-workout, and my range of motion has definitely improved overnight (albeit mildly), I’m going to see what tomorrow brings. When I experience soreness post-workout it normally flares up on day 2, and by day 3 is starting to go away again, so this is an interesting exercise in pain threshold and sensibility. Stay tuned- I’ll keep you updated on the T-Rex arms in the next few days.

View all posts by CookCakeKate