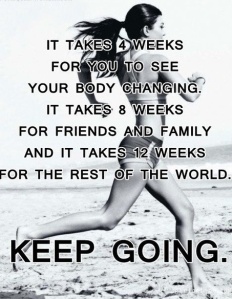 So, I’m more than half way through week four of the challenge. The image I’ve posted is one that’s been floating around Pinterest and Facebook for years, and I’m not entirely sure of how true it is, but it’s something that’s stuck with me. Given that four weeks is nearly up, I’ve started to reflect on my own change. Is it really there? Am I imagining it? What changes am I actually noticing?

Over the past week I’ve started to consider how I’m actually measuring success in relation to this challenge. At the start of the challenge I weighed myself and had a (very confronting!) photo taken of me, but I didn’t take my measurements. Perhaps I should have, because I suspect that’s where I’m going to see the biggest change given that I’m continuing to build muscle. This morning J took a second photo of me- a ‘week 4 progress shot’ (it was required of me by the Challenge organisers). I don’t think a random person would see the differences between the two photos, but I did.

So, having had the photo taken and done a bit of self reflection, here’s how I know I’m succeeding at the four-week mark:

And of course this challenge is not all about losing weight for me- it’s about changing habits too. I’ve been successful in that so far- but I’m definitely still in the stage where I have to work hard to continue the behaviours I want to set as new habits, and I still have to fight hard against the old habits. Here’s some recent successes I’ve had in terms of all of that:

So, I’ve got a long way to go. there’s 8 weeks left in the challenge, and it doesn’t stop once I get to that point. The real goal here continues to be the squashing of some bad habits and the introduction of some new habits, and I think that it’s going to take some work once I finish this challenge to maintain them. But that’s a hurdle for another day- for now I continue to focus on exercising at least four times a week, and as much as possible eating food made from fresh meat, veg and fruit. Baby steps.

View all posts by CookCakeKate